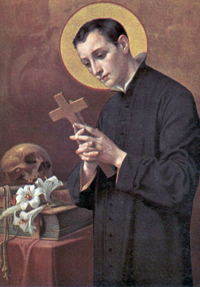 At a young age Gonzaga was placed in the court of Francesco de’ Medici in Florence. His family greatly disapproved of his desire to abandon his life of privilege to join the Jesuits. Gonzaga volunteered to treat plague victims in Rome where eventually he too became ill and died.